How Storytelling Can Heal an Emotional Wound

I was starting to panic and I didn’t understand why. I got more and more nervous and upset as the day progressed. But why? The story I was going to tell at a local comedy club was one I’d been telling for over 15 years.

This is the the story of how telling a story healed a deep and painful emotional wound.

Back in 2012 I participated in a local evening of storytelling called The Story Project. The theme for the evening was Actors, and because I was a professional actor for 16 years in Chicago and Hollywood, I was invited to tell a story.

Over 44 years ago, when I was a young actor in Hollywood, I joined an experimental theater company. One night we did an exercise called Outer Theater. The task was to find a partner and then go out into the surrounding community and do something we would never do. It had to be a risk, something outside of our comfort zone.

The year was 1974, during the height of the streaking craze. So my partner and I decided to go streaking. As it turned out, we not only went streaking, we were ambushed by some overly zealous cops and got arrested…naked. I thought it was funny. The cops took it very seriously.

As an actor, I usually played the part of the comic relief. I was the goofy side-kick. In other words, I was the funny one, the one who got the laughs. I was a character actor and had become really good at acting the nerd. I even had the bow tie and dorky glasses to complete the look.

All of my friends told me that because I was so funny, I should try stand-up comedy, but I never felt that I had any good material. After getting arrested naked, I felt like I had something funny to work with. I had a funny story. 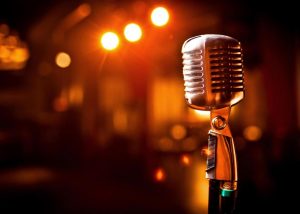 A couple of weeks after the streaking experience, I went to an “open mike” night at a comedy club. It was the typical comedy club stage with a microphone on a stand and a red or brown brick wall in the background. When it was my turn, I stepped up to the mic told my streaking story. But no one laughed. I tried it again at another comedy club and once again, no one laughed. I tried to use that story as comedy material at five different clubs before I gave up. It was embarrassing and painful.

I decided that I’d never try stand-up again. It had left a mark on my psyche, a wound.

Life moved on and 17 years later after I’d left Hollywood, as I was speaking to a small audience in a meeting room in a public library, I told my streaking story. I hadn’t planned on telling it, it just happened. But this time, I wasn’t in a comedy club and I wasn’t trying to be funny. And it worked brilliantly. It was hilarious and the audience howled with laughter.

It wasn’t that the story wasn’t funny, I just didn’t know how to tell it.

I discovered how to tell my streaking story so well that it became the one story I could always count on for laughs. It’s a story that’s brought me countless speaking engagements and more that a million dollars in revenue. In fact, the revelation and analysis of how I told that story became the foundation for The Story Theater Method.

Fast forward to December 13, 2012, the day before I was to present the streaking story for The Story Project.  I was doing some research by watching a You Tube video of people telling their stories onstage in the Story Project theater. And there it was, the stage with the microphone on a stand and the brick wall. It looked exactly like one of the clubs where I’d bombed in Hollywood.

During the day, I noticed that I was starting to panic. I was getting all plugged in to the emotional states that I had experienced so often in Hollywood. The fear of stepping onto that stage and telling the same story in almost the same environment, was making me crazy. I finally realized that those comedy club experiences had created an emotional wound that had never healed.

But it made no sense. In my mind I knew that my streaking story was one of my best stories and that it had worked in front of hundreds of corporate and association audiences. But in my gut I felt like a struggling 24-year old actor. The emotional wound from the comedy club failures was very real and present.

That evening, when I got to the Story Project theater I started to relax. I was no longer a scared kid in Hollywood trying to prove myself. There would be no Hollywood agents in the audience looking to discover the next Jim Carrey. I was now a 62-year old successful adult in another time and place with nothing to prove to anyone – except to myself of course.

I Had Nothing to Prove

The people in the audience were just local folks who loved to hear good stories. A number of my friends had come to support me. And of course my loving wife, Deborah, was by my side. Suddenly, I was very calm. 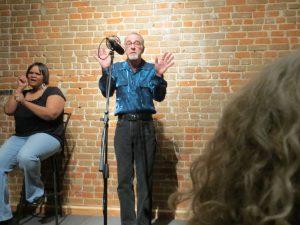 I was the fourth of four storytellers. While the other storytellers did their presentations, I listened and laughed and was totally present with them. When it was my turn, I performed my Streaking Story the way I have now performed it hundreds and hundreds of times all over the world. The audience howled with laughter and at the end, I got a standing ovation.

Afterwards, as people came over to congratulate me, I basked in the glow of success. I had faced the old demon emotions of fear and insecurity and I had prevailed.

The Story That Healed the Wound

The next day, as I was re-living the experience, I was ecstatic. I realized that by telling my story in that particular venue, I had healed the emotional wound of failing at all of those comedy clubs. I had told the same story, in a very similar environment, and this time I was hilariously funny. I faced my fear and walked away renewed.

We all know that stories have the power to heal our audiences. What I have also learned from helping my students is that they can be healed themselves, through the telling of their most painful and intimate stories.  And now I understand that firsthand, for myself.

How about you? What story do you need to tell that will heal an old unresolved wound? Isn’t there an old saying:  “Storyteller, heal thyself?” or something like that!  Be brave and use your stories to heal your audiences, and to heal yourself. 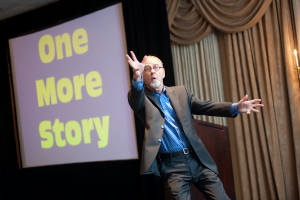 Doug Stevenson, CSP, is a storytelling-in-business keynote speaker, trainer and speaking coach. He collaborates with salespeople, leaders, professional speakers, trainers and fundraisers to help them make a point, teach a lesson or sell a product or service. He has delivered storytelling keynotes and training in 18 countries and has coached thousands of business professionals who want to need to improve their storytelling skills to advance to the next level.